10 Unique Features/Attributes About The Mazda Cx 9

Here are 10 unique features/attributes about the Mazda CX9. Also included are some features that do more then you might think.

Mazda has released the new Mazda CX9 and when you first see it you can tell it is a Mazda vehicle. The design is slightly different from the rest but still follows Mazda’s design of creating a smooth and sleek car that also gives off a strong impression.

What is unique with the CX9 design is the extra curve along with the doors that makes it look more resilient. Offering a bunch of the colours that Mazda is known for. The Mazda CX9 became a very sophisticated looking Mazda vehicle.

Sunroofs are not a new concept but a very well appreciated twist. Some people might not care about having a sunroof all that much but if you drive a lot it can make a big difference. You can find the sunroof in the GT and AZAMI models of both the FWD and AWD ranges. A sunroof can actually be more beneficial to health then what people think.

It is known that being next to flora, like bushes and plants, can reduce stress. This effect can also be caused by wind as it reminds people of oceans or some pleasant memories. So, having a sunroof is not just a unique addition but also an addition that can help the mentality of the driver on long road trips.

The roll stability control is an easy concept to understand but is a hard concept to picture. So how does the CX9 have control over potential rolls?

It is done by looking at the speed and the amount of turn the wheel is going through with the roll stat sensors. After looking at these aspects it will adjust the brakes and/or adjust the torque into the opposite direction.

Safety is never too important and this can go a long way for the driver’s protection.

Cameras are not just great for displaying images they are also great for reading information. Imagine a second pair of eyes that only focus on the road signs nearby. This addition is great not just for new drivers but anyone who is planning on driving anywhere new. All this information is displayed in front of you with the heads-up display.

No matter how much you are used to driving you can always be caught off guard by a sneaky sign placed around a corner. That is why having technology that tells you the speed limit and other important information is a great addition.

A unique name for a unique addition to a special car. The name does not give you a great idea of what the feature is doing. So to break it down it mostly focuses on alarming a user if there is a potential chance of crashing into something.

This is done by using a wave radar that can tell the distance of an object in front. If the object in front does not move out the way and becomes too close the car warns the driver for immediate action.

This feature might not be as fancy as others like the roll stability control but this addition is something that is excellent for people who use trailers often. Even if you do not use trailers often there is no doubt that you will end up needing to use one at one point. So be glad that when you do you will have this feature. However, if you’re planning on transporting a large amount of junk out to the tip, we’d recommend you still hire a Perth skip bin.

The trailer stability assist focuses on increasing the car’s stability by the same method as the roll stability control. By working with the torque and controls it makes the Mazda CX9 very stable while using a trailer.

The 360 View Monitor has slowly started becoming a go-to addition from Mazda to their best cars. The addition of this technology helps provide some useful advantages in not just comfort but also for safety. So why is this technology such a welcomed addition to the Mazda CX9 and what more does it offer from other normal rear-view cameras?

The 360 view monitor does as the name suggests by having multiple cameras located around the vehicle. These cameras aren’t obvious so do not worry about it messing with the design. This allows a lot more than just a normal rear-view monitor as you can also see everything around the car from a top-down view so tricky manoeuvring becomes even easier than before.

Now to the good part, the turbo engine. Inside the Mazda CX9 is Mazda’s 2.5L, 4 cylinder DOHC S-VT petrol turbo engine that also features i-stop and i-ELOOP. The engine itself is very efficient with a low consumption rate that also puts out a huge amount of power and strength. Offering 170kW of power and 420Nm of torque.

The i-stop addition acts to automatically turn off the engine when the vehicle stops. The purpose of this is to save even more fuel consumption to help reduce petrol costs for you even more.

The i-ELOOP sounds like future technology with how it works. When stopping, all that extra force created is turned into energy and is saved for later. This energy is then used on the technology inside and to also help the battery. 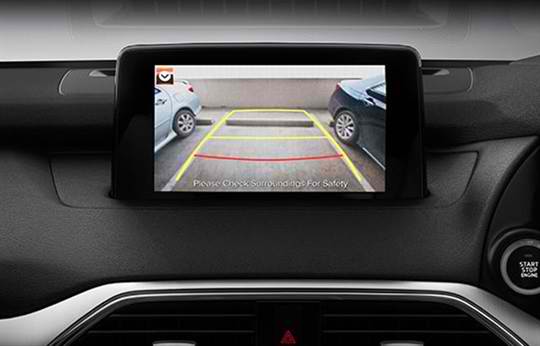 Though a very simple concept it is without a doubt one that any driver would like to have. It does what it sounds like, it monitors your blinds spots for you. With the use of cameras, the Mazda CX9 is capable of monitoring your blind spots and will notify the driver when they try to change lanes.

Lastly on the list is how good the car is for the price and how far spread the price range is. The Mazda CX9 is offered in 4 different models for both the FWD and AWD to give customers more choice. If you want a more affordable variant then you can stick with the SPORTS model and have a good chunk of the accessories. If you pay a little more there are more awesome additions like the sunroof and extra safety features.

The Mazda 6 Accessories You Need For Your Car