It was a mix of surprise followed by excitement and curiosity when Mazda announced that it would finally be introducing its first fully electric vehicle, and unveiling it at a Tokyo motor show back in mid-2020.

It is a welcome addition to the Mazda family that focuses on the importance of environmental protection and reducing greenhouse gas emissions. It represents a big step in the sustainable direction for Mazda, joining the growing electric vehicle (EV) market.

Shortly after, Mazda announced that another variant of the MX-30 would be available featuring its mild hybrid system. Called the Mazda MX-30 M Hybrid, this is the model that Mazda Australia will be bringing onto our shores first, with the fully-electric variant promised to come soon after.

What exactly is the mild hybrid system and how does it work?

Unlike in a fully electric version, the mild hybrid system is a powertrain that uses a mix of energy mainly from a traditional internal combustion engine that is aided to a small extent by an electric motor powered off a battery. The battery recovers kinetic energy and is charged through regenerative braking and deceleration. This electricity is in turn used to run the vehicle’s electronics and help deliver temporary boosts of driving power.

The main benefits of a mild hybrid system are improved fuel efficiency and lower emissions.

In the case of the Mazda MX-30 M Hybrid, it runs on the 2.0-litre e Skyactiv G petrol engine that is supplemented with assistance from a 24-volt lithium-ion battery.

How does mild hybrid affect driving?

When driving a mild hybrid there shouldn’t be too much of a difference from the normal driving experience. One thing you might notice is a faster or smoother take-off, as the battery should provide assistance when accelerating. The other effect would be a ‘heavier’ than normal braking experience than normal due to the regenerative braking that the MX-30 M Hybrid employs to recharge the battery. 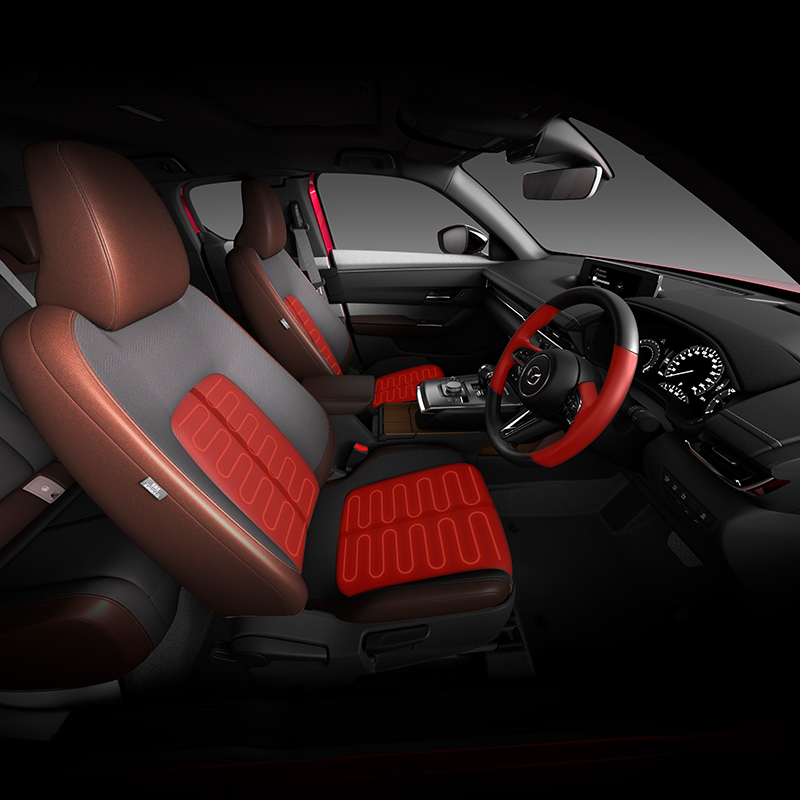 In fact, the mild hybrid system used by the MX-30 M Hybrid is the same type of system that’s already available in Mazda 3 and Mazda CX-30 variants available in a few select markets around the world (sadly, Australia wasn’t one of them).

The Mazda MX-30 is based on the same platform as the CX-30 crossover SUV (its “petrol twin”), with similar overall dimensions.

When it comes to the exterior styling of the MX-30, Mazda decided on taking a different spin on the usual Kodo design we have grown accustomed to with the current lineup of Mazda’s. But the essence of the design philosophy is still present.

The look of the MX-30 M Hybrid can probably be best described as being a coupe-style SUV, which coincidentally (or maybe not?) ties in nicely with the fact that the MX-30 model follows the same naming convention as the sporty MX-5 roadster.

The other more prominent difference you will notice is that there appears to be only 2 side passenger doors, much like a coupe, and definitely not a usual sight on an SUV. This marks the return of Mazda’s freestyle doors concept – basically a nod to the legendary RX-8 that sported the same door design back in the day. The two normal-sized front doors open like usual, while the two smaller rear doors open ‘backwards’ (ie. swings towards the rear of the car). Basically opening the freestyle doors is kind of like opening a two-door closet but on the side of your car.

Other than the cool factor of the freestyle door design, doing away with the traditional side (b) pillars in the middle creates a single huge opening on the side when the doors are open, giving you more room and greater functionality in accessing the inside.

Green on the inside too

Mazda’s focus on helping the environment also extends into its interior cabin with its use of innovative and sustainable or recycled materials.

The front and rear seats in the Mazda MX-30 M Hybrid as well as the upper door trims are covered in Maztex leather, a special felt-like upholstery material made from recycled plastic bottles. The production of Maztex leather is also done using a water-based process instead of nasty solvents and chemicals.

You will also find surfaces made from “Heritage Cork”, from the floating centre console to the inner door handle trim of the MX-30 M Hybrid. A natural material, cork is made by harvesting from the bark of a tree without the need to chop it down. Mazda also uses waste product from champagne cork manufacturing.

Fun fact: The name “Heritage Cork” is derived from Mazda’s roots as a cork manufacturer in the 1920s. And as part of the celebration of the company’s centenary, Mazda sourced its cork from Hiroshima, Japan where it was based when it used to make corks.

The 2021 M Hybrid was slated for sale in Australia starting from April 1 and will be making its way onto the showroom floor of Mandurah Mazda in due course. Give us a call and check in with us to see when you can test drive this new mild hybrid SUV.

In addition to the incoming MX-30, Mandurah Mazda also has the newest cars with the latest features in Mazda’s whole range for you to try. So come on down today, our friendly and knowledgeable team is waiting to assist you. Our Mandurah Mazda dealership also doubles as a Mazda car service centre, so if your car is in need of a service give us a ring today!

Should My First Car Be New or Used

What Should My Tyre Pressure Be?